MERRY CHRISTMAS to each one of you!  Michael and I feel so blessed to approach this loving season with good health and hearts overflowing with joy.  He is the Reason for the season.
We’ve spent a great deal of the year traveling for book promotions, but our favorite trip was going “Down Under” to visit youngest daughter Ticiana and her family.  They live in Melbourne, Australia and so we added on a week’s trip to Tasmania just for fun!  What an amazing place: we saw all the unusual animals that dwell down there, including the Tasmanian Devil.  If you would like pictures, just email us and we’ll send them off.
We will not be sending out a Christmas letter (again) this year, but we hope you will follow us through our BLOGS to keep up with our busy lives.  Our newest child: Water To My Soul: The Story of Eliza Lucas Pinckney, has just been released, and has been well-received through early reviews and book sales! 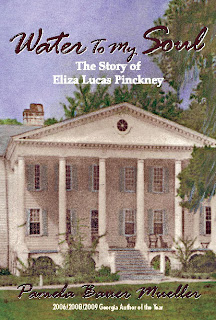 Below are several reviews.  You will find more on our home page: www.pinatapub.com.
Not only is it rich in dialogue that carries the story along, it is also an engaging "period piece" of our colonial history. This fascinating true-life drama, wonderfully fluid in its pace and written with warm and sensitive intelligence and attention to detail, draws us into Eliza’s personal journey in southern colonial America. As I came to the last pages of Water to My Soul, I felt appreciation for the sheer pleasure of reading it.  I highly recommend Pamela Bauer Mueller's Water To My Soul.  Meg Cunningham
Your new book is so wonderful!  I have read many books, notes, etc. speaking of Eliza Lucas Pinckney but yours has captured her entire life in such a beautiful manner.  Johnie Rivers/historian
Water To My Soul is your best ever!  I LOVE it!  This book should really put you in another category as an historical novelist.  You amaze me that with your west coast origin via Mexico & Canada that you are able to capture the history & feelings of the south. Louise Hooper
Eliza helps me have perspective on my own life. Her many loses remind me of my many blessings. Your writing has captured her beauty!  Kim Belt
I loved the triumphs and stories of Eliza's life. I marvel at how well she dealt with all of life's challenges and how she provides a wonderful perspective for how we should view our lives. Your knowledge and detail for that time in our country’s history is amazing.  Cassandra Coveney
I am truly enjoying the new book, Water to My Soul.  I really appreciate your including her prayers: so heartfelt, human and loving.  Patricia Duke
Eliza had to be a remarkable woman to pursue her dream and become interwoven in the fabric of our country’s history.  God has truly gifted you in your writing.  Your word pictures about His lovely world speak volumes about who you are and WHOSE you are!  Eleanor Miller
Have a beautiful Christmas and a blessed New Year!
Gratefully,
Pamela Bauer Mueller
Posted by Pamela Bauer Mueller at 1:01 PM No comments:

Summer is streaming away, and I’m 2 months behind on my BLOG.  Ay yi yi!!  At least they’ve been two fun-filled, enjoyable months.  Trips to San Diego, Florida and South Carolina, a week visit from our 12 year old granddaughter, a presentation at the Historical Novel Society Convention, where we met some great writers and made new friends, and adding the final touches to Water To My Soul: The Story of Eliza Lucas Pinckney: my new historical novel  soon to be launched, just took up more time than I expected!
As all writers know, the birthing of a book is a very traumatic experience.  Is it good enough?   Will people like it as much as my other titles?  Are there any mistakes that my various editors missed?  And finally, did I do the best job I could to tell my protagonist’s story?
Yet once we hold our new baby in our hands, we breathe a sigh of relief and the joy returns.  Water To My Soul is my ninth baby, and we’re ready for her arrival!
Eliza Lucas Pinckney was an incredible Renaissance woman who lived in South Carolina during the colonial period.  She was born in the West Indies, schooled in finishing schools in London, and then brought by her military father to Charles Town, South Carolina when she was just fifteen, where they settled on one of the three plantations her father had inherited.  After only  two years, he was called back to military service to fight against the Spanish.  Leaving Eliza to care for her invalid mother, younger sister and to run the three plantations, he impressed on her the need to find a cash crop to cultivate in order to help out Mother England as well as free their lands from mortgage.
She chose indigo: against all odds.  She was told it would never grow in the New World.  Yet with true grit and strong will she proved everyone wrong.  This book tells the story of how she made a better future for herself, her family, her society and our fledgling democracy.
My good friend Buddy Sullivan, an award winning Coastal Georgia Historian, penned these words for me as his endorsement.
“Once again, with keenness of insight and perception previously unrevealed in historical novels of this period, Pamela Bauer Mueller provides us with an enlightening glimpse into the world of an exceptional woman in colonial America. Eliza Lucas Pinckney’s story offers an illuminating awareness of the unique culture of indigo planting, while also presenting an intimate perspective of everyday life in colonial Charles Town and its low country environs. Not only is this an educational story of a remarkable 18th century woman with extraordinary courage, skill and grit, but it is also an absolute delight to read!”
I think with that, dear readers, you will be excited and eager to delve into this new historical novel, which we are expecting to make its appearance around the end of the year.  Stay tuned!
Pamela
Posted by Pamela Bauer Mueller at 3:11 PM No comments:

Oh my!  Reading over my last BLOG, I discover it’s been three months since I’ve written!  My excuse is that this has been a busy time of writing and travel.
After finishing the first draft of “Water To My Soul,” I escaped all work involving writing/marketing for a Girls’ Weekend (with 20 of my closest friends who shared life with me in Mexico) to Cuernavaca, Mexico: a beautiful weekend resort an hour from Mexico City.  Mimi Mulligan and I met in TX, flew to Acapulco together for a 4 day rest, and joined the others in Cuernavaca for a long weekend, at the hacienda of my dear friend Oliver Araiz.  I hadn’t seen some of these ladies in 25 years!  But we picked right back up as if it were yesterday.  Friendships are so precious!
“Splendid Isolation” has garnered another accolade: it is a finalist in the 2010 ForeWord Reviews Book of the Year Finalist in the Fiction-Historical category.  The results will be announced in May at the ALA/BEA convention.  Keeping our fingers crossed…
The new manuscript is in the hands of my New York editor.  Soon I will know what and how many changes she recommends.  I find that the more suggestions of hers that I follow, the better the book.  Amazing, eh?  She truly knows her business.
Michael and I will travel a great deal in the upcoming months for conventions, art shows, and presentations.  One of the highly anticipated events is the 2011 Historical Novel Society Conference  in San Diego, CA on June 17-19, 2011, where I’ll be a speaker and panelist.  The best news is that my daughter, Cassandra Coveney, and her family live there, so we’ll spend extra days with the grand kids!
You can follow our comings and goings on www.pinatapub.com.  My husband is such an integral part of our publishing business, and I thank God for his love and willing partnership every day.
Stay tuned!  Hopefully, we’ll chat before three more months evaporate!
Blessings,
Pamela
Posted by Pamela Bauer Mueller at 2:18 PM No comments:


New opportunities, new challenges!  I love the beginning of each year!  Ours started out in Cartagena, Colombia, where Mike and I were traveling with my brother and his wife.  We spent two wonderful weeks in Colombia, accompanied most of the time by a local young lady and her family!  Paola Leon had lived in Oregon for a year with my brother Jack as an exchange student, and was now sharing her amazing country with us.  What a perfect way to begin our new year!
Work on the next novel, tentatively titled Water to my Soul, is coming along well.  I feel I’m three-fourths through the initial writing.  I’ve booked six days away for my “hermit” break at an undisclosed location to write 8-10 hours a day, after which I expect to bring home a nearly-finished “first draft.”  I feel another trip to Charleston, S.C. may be helpful to answer any questions I may have.  After the first draft comes the cosmetic surgery on the novel!
Sales of Splendid Isolation continue to amaze us, for which we give thanks to the Lord.  Kindle sales of the book are rising rapidly, as well as Book Nook purchases.  We understand this is the way of the future, and we embrace it but still love to hold our books in our hands.  I haven’t even been tempted yet to buy an e-book reader.  Let’s see how long that lasts.
Splendid Isolation has picked up two national awards so far: runner-up in the Wild Card category in the New England Book Festival and a finalist in the 2010 U.S.A. Best Books awards contest in the Biography/History division.  We have entered the book in several other award contests, and are keeping our fingers crossed.  Stay tuned.
Our events have led us to so many interesting places!  The most exciting part of marketing our books is the people we meet.  Please visit our website: www.pinatapub.com to see where we’ll be in the upcoming months.  Let us know if we are in your area and we’ll try to meet you.
Be blessed, and enjoy your 2011,
Pamela
Posted by Pamela Bauer Mueller at 4:05 PM No comments: